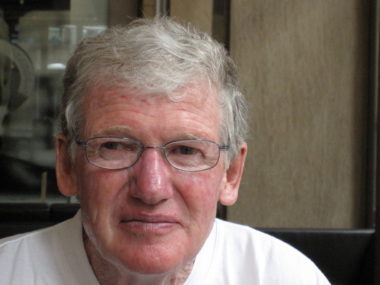 From 1958, the year after leaving school, Tony served on the Old Boys’ Association committee for 50 years – over 40 as treasurer.  Among many notable involvements in Old Boys activities, Tony remembers successively running an Old Boys cricket team through most of the 1960’s and in 2004 as part of the school’s 75th year celebrations, he joined a group of students and teachers in a 3 day bike ride via fire trails and back roads to Cooma where they rendezvoused with members of the school family at the site of the former Monaro Grammar School. When his cricketing days began to wane he took up running to remain fit, competing in no less than 35 marathons.

After 43 years working as an accountant in various Government Departments, Tony celebrated his retirement and the Centenary of Federation by riding his bike from Alice Springs back to Canberra. He has since pedaled his way across Australia twice – south to north then east to west. Retirement has allowed for extensive overseas travel including biking in Ireland, Holland and from a boat on the Danube as well as a walking trek across England.

Currently, Tony in a more sedate role, is researching and profiling the careers of former teaching staff who have advanced to a Headmaster/Principal position in another school. The amazing number of 25 profiles have so far been completed. Tony has 3 daughters, who have accompanied him on many of his overseas travels, and 5 grand children.