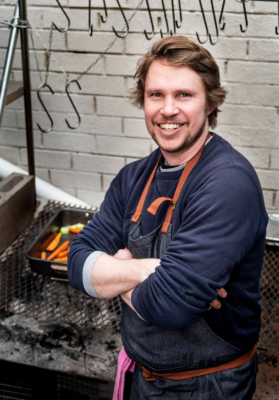 When Simon left school he lived in England where he worked as a mixologist cocktails at what was once the Worlds Best Cocktail Bar. Whilst he loved creating interesting and exciting cocktails, he missed adding texture to his creations and knew he wanted to do something more. It was then that Simon decided to fill in a very long application to Master Chef. Simon is extremely grateful for this experience as it has not only provided a platform by which to showcase the potential of vegetables and especially the off-cuts that often get thrown away, but to further his food sustainability calling through a variety of endeavours.

Simon is planning on opening a vegan smokehouse, not because he is vegan or even vegetarian, but because he strongly believes that if we learn how to make vegetables ‘sexy’ then the reliance on meat as the hero of any dish would be reduced and thus reducing our environmental impact. He drew parallels between this thinking and the fact that he served up a dish of broccoli stems on MasterChef. This is normally the part that most at-home cooks discard, but Simon is on a mission to reframe our thinking about food waste and reduce the amount we send to landfill by learning how to utilise the whole vegetable in incredibly flavourful ways.

Simon is also spearheading a marketing campaign with this same reduce food waste message as he quoted that $8 billion of edible food is thrown into landfill every year. An astonishing 35% of vegetables grown by farmers are thrown in the bin due to it being too small or ugly, and then the supermarkets throw away a further 35%, and that’s before it even gets to the end-user!

Simon has proved to be a great role model for students at Canberra Grammar School. 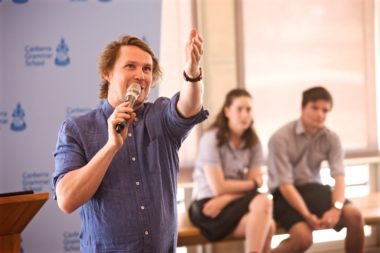