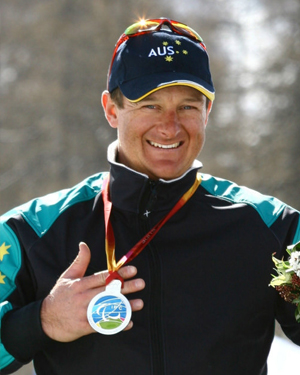 Michael attended CGS from 1978 to 1990 and was in Burgmann House. He is one of Australia’s best-known athletes and a Paralympic skiing and cycling champion. Skiing since the age of three, Michael first skied on one leg at the age of nine. In 2002, he won four gold medals at the Salt Lake City Winter Paralympic Games. He was the first person with a disability to ski at over 200km/h and is Australia’s fastest ever skier. His ski racing medal count stands at eleven Paralympic medals (including six gold) and eleven World Championship medals (including six gold). After taking up cycling, Michael won a gold medal in the 3000m Individual Pursuit at the Australian Track Cycling Championships in 2007 and also broke the Australian record. Michael has overcome cancer twice, and returned to cycling to compete in Australia’s Paralympic Cycling Team in Beijing, his sixth Paralympics but first summer games.

Michael has twice walked the Kokoda Track in PNG and hiked to the summit of Mt Kilimanjaro. His latest passions include mountain biking and triathlons. Michael has competed in two World Paratriathlon Championships in 2012 in Auckland and New Zealand and in 2011 in Beijing where he finished fourth.