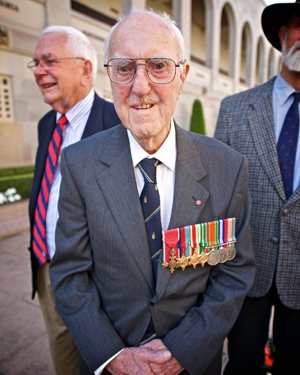 Irwin was born in Adelong in 1914. He came to CGS in 1929 and was 32nd on the School Roll. After leaving school, Irwin worked with JB Young and later ran a barber and tobacconist shop with his father who was the hairdresser at Canberra Grammar School. Young Irwin soon found himself back at CGS cutting the boarders’ hair.

In 1937 Irwin joined the Public Service but left in 1939 to join the AIF. He served in the Middle East and New Guinea with the 2/6 Australian Field Regiment. On discharge in 1944 he rejoined the Public Service with the Department of Social Services. He married Joyce Shelton in 1945. In 1948 his department was transferred to Melbourne, and he and Joyce lived, worked and raised their family of five children in Melbourne until 1984 when the department was transferred back to Canberra.

On retirement in 1979 Irwin was awarded the OBE.