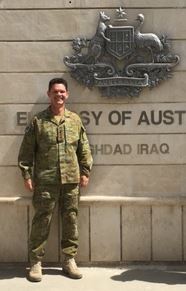 Brandon graduated from CGS in 1987 and went straight to the Australian Defence Force Academy (ADFA) and then into the Army, and he never left! He has enjoyed over three decades in this line of employment which has taken him to some of the most remote places in Australia, and some equally magnificent, yet contested countries of the world. After a brief period where he thought he had settled back in Canberra, he was fortunate to be offered the position of Defence Attache in the Australian Embassy in Baghdad, which he accepted in 2017.
After a brief period in Canberra, he is now the Defence Attache in the Australian Embassy in Israe