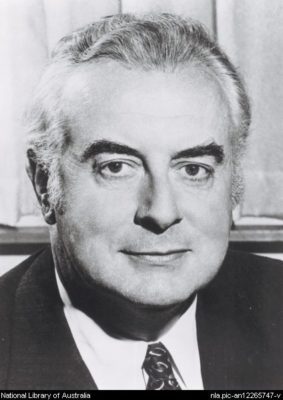 Canberra Grammar School laments the passing of one of its most prominent Old Boys, former Prime Minister Gough Whitlam.

Edward Gough Whitlam joined the School in 1932, for what he claimed were “disciplinary reasons” and was dux in 1932, 1933, and again in 1934. During his time at the School he was known for his academic prowess, especially in English, Latin and French. Although he is said to have had mixed views of his time at the School, he visited on a number of occasions in later life and gave memorable addresses at Speech Night and the Year 12 Valedictory Dinner. On leaving the School, he earned a Canberra Scholarship to study Classics at the University of Sydney.

He became leader of the Labor Party in opposition in 1966 and became Prime Minister in 1972, leading the Labor Party to victory for the first time in 23 years. Despite the controversial dismissal of his Government by the Governor General in 1975, his time in office is often regarded as a watershed in Australian political life. His reform agenda, along with his towering stature, intellect and wit cast a long shadow in subsequent politics.

Amongst other things, his brief time in Government saw the withdrawal of Australian troops from Vietnam, the establishment of the Department of Aboriginal Affairs, the reduction of the voting age to 18, the establishment of Medibank, the abolition of university fees to broaden access to higher education, the end to the White Australia policy and the introduction of equal pay rights for women.

Always committed to internationalism, he also established Australia’s modern relations with China in the midst of the Cold War, visiting first in 1971 as Opposition Leader then in 1973 as the first Australian Prime Minister to visit China. His efforts in this domain are reflected in the School’s annual award of the Gough Whitlam Prize for the Promotion of International Understanding.