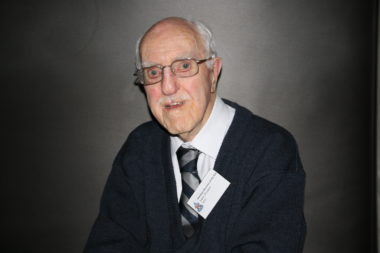 Irwin was a beloved member of the CGS community, the oldest member of the Vintage Club, and became a student at CGS on its founding day of 1929 as student number 32. He sadly passed away at 100 years old on 17 August 2015.
Throughout his time at the School, Irwin received not only many academic prizes, but was a high performer across a number of sports, including Athletics, Football and Hockey – even playing a game of Rugby in the snow.
After leaving the School, Irwin joined the public service and also served in the Army from 1939 to 1944 in the Middle East and New Guinea as a part of the 2/6 Australian Field Regiment. He then rejoined the public service on his return home and shortly after married his wife, Joyce Shelton. Retiring in 1979, Irwin was a long loved member of the CGS community and the boys always looked forward to seeing him regularly at events.